The USS Iowa left its berth at the Port of Richmond for the journey to San Pablo, CA on May 26th, 2012. Here is the Iowa BB-61 berthed as seen from Google Earth.

Here’s the view of BB-61 mothballed at the Ghost Fleet in Benicia, CA in Suisun Bay in 2009, a tugboat is making a wake pushing into position: 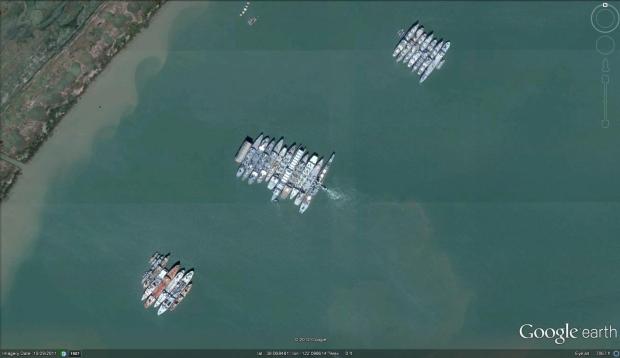 A small crew aboard the USS Iowa began hauling in the mooring lines about 10 a.m. on Saturday, May 26, 2012 in Richmond, California. The last line was thrown 20 minutes later to cries of “Ship away!” The ship, its shiny gray paint glistening, began easing away from the dock. A small tugboat, the Delta Billie, eased forward to nudge the Iowa even further into the channel to launch the battleship on its way to its new home in Los Angeles. Below is a photo from the Contra Cosat Times as it slips under the Golden Gate Bridge.

The USS Iowa passes under the Golden Gate Bridge in San Francisco for the final time Saturday afternoon May 26, 2012 enroute to Los Angeles where it is being towed to become a floating museum, a dream that many here had hoped would happen in the Bay Area. (Karl Mondon/Staff)

USS Iowa on 26 May 2012, passing under the Golden Gate Bridge on her way to the Port of Los Angeles Image: Barry W. Johnson via Wikipedia. Click for much larger image.

This entry was posted on May 27, 2012, 9:49 pm and is filed under Ships and Submarines. You can follow any responses to this entry through RSS 2.0. You can leave a response, or trackback from your own site.