Trapezoid in the high desert 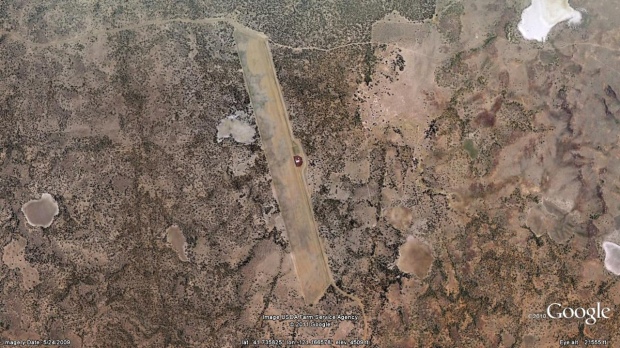 Actually, there are three identical areas like it seen when we zoom out: 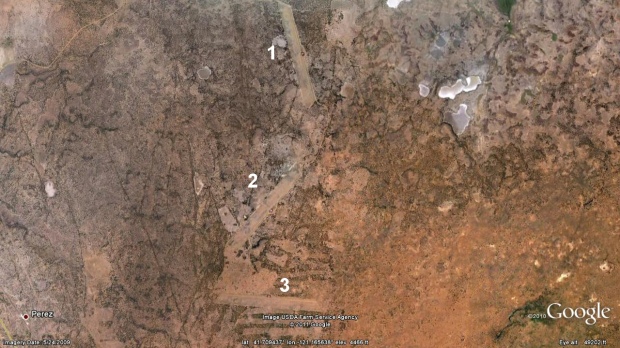 I’ll give you a hint, it has something to do with the Air Force but these aren’t landing strips.

The answer, from GlobalSecurity.org

The U.S. Air Force’s over-the-horizon-backscatter (OTH-B) air defense radar system is by several criteria the largest radar system in the world. Six one-million-watt OTH radars see far beyond the range of conventional microwave radars by bouncing their 5-28-MHz waves off the ionosphere, an ionized layer about 200 km above the earth. It was developed over 25 years at a cost of $1.5 billion to warn against Soviet bomber attacks when the planes were still thousands of miles from US air space.

In 1970, Air Force Rome Air Development Center [RADC] engineers developed and constructed components for a frequency modulation/continuous wave (FM/CW) radar capable of detecting and tracking objects at over-the-horizon ranges. The radar installation and evaluation was accomplished on 15 September, while flight tests of a Beverage array antenna were completed on 30 September. On 30 October 1970 the radar and the Beverage array were integrated and operated as a single system for the first time.

The West Coast Sector included an operations center at Mountain Home Air Force Base, Idaho, the transmitter at Christmas Valley, Oregon [43°16’00″N 120°21’40″W], and the receiver at Tule Lake, near Alturas, California. GE Aerospace was initially awarded a contract valued at $145 million for the first two sectors of the West Coast system, with an additional contract for the third sector for $56 million awarded in November 1987. The total value of the West Coast system contract was expected to be approximately $313 million. The system was turned over to the USAF at the end of 1990 for operational tests and evaluation.

The Department of Defense initially planned a central sector radar facing south, and an Alaska System facing north, to complement OTH-B radars on the east and west coast to detect enemy bombers and cruise missiles. With the end of the Cold War the military requirement for the central-sector radar had largely disappeared, and it was being pursued almost exclusively for the drug interdiction mission. The Congress found this system to be redundant and unnecessary for this effort.

The total value of the ceiling price of that contract for the first and second sectors of the portion of the OTH-B radar program known as the Alaskan System was estimated at $530,000,000. The unexpected cost growth in the deployment of the first sector of the Alaskan OTH-B system defered procurement of the second sector of this system until at least fiscal year 1991. The main reason for the cost growth is the high cost of construction of this type of facility at the site selected by the Air Force. Consequently, the deployment of the Central CONUS system was deferred at least until fiscal year 1992, with land acquisition required no earlier than fiscal year 1991.

With the end of the Cold War, just months after their deployment, the three OTH radars on the West Coast were mothballed, and the incomplete Alaska System cancelled, but the three radars in Maine were redirected to counter-narcotics surveillance. In 1994 the Congress directed the Air Force to continue operating the East Coast OTH-B radar at no less than a 40 hour per week schedule, and to ensure that all OTH-B tracking data was transmitted directly to DOD and civilian agencies responsible for providing counterdrug detection and monitoring support to law enforcement agencies. In order to utilize the full potential of this wide-area sensor, the Congress directed DOD to (1) assist the Air Force in linking the East Coast OTH-B radar site data directly to users, including but not limited to the U.S. Customs/Coast Guard C3I Center, Miami; Joint Task Force 4 Operations Center, Key West; U.S. Southern Command Operations Center, Key West; and U.S. Southern Command Operations Center, Panama; and (2) fully cooperate with efforts of other government agencies to utilize the dual-use capabilities of this system for remote environmental and weather monitoring and other purposes.

The Air Force maintains the six East Coast and West Coast OTH-B radars in a state called “warm storage,” which preserves the physical and electrical integrity of the system and permits recall, should a need arise. It would require at least 24 months to bring these first generation OTH-B radars out of caretaker status and into an operational status-if such a decision to do so were made. Major upgrades costing millions of dollars would be necessary to bring the outdated technologies up to modern standards. The incremental cost of operating the East Coast OTH-B system for environmental research and services is about $1.0M to $1.5M per year. The environmental monitoring aspects of the system are unclassified. Similar coverage in the eastern Pacific could be obtained at about the same cost.

In 1991, NOAA recognized the potential of these military relics of the cold war for environmental monitoring and asked the Air Force’s permission to look at the part of the radar echo that the Air Force throws away — the ocean clutter. NOAA’s tests showed that this clutter can be processed to extract ocean surface wind direction over huge, data-sparse ocean areas — vital information that affects climate and the ocean’s circulation. Tropical storms and hurricanes were tracked, and a system for delivering radar-derived winds to the National Hurricane Center was developed. The combined coverage of the six OTH-B radars is about 90 million square kilometers of open ocean where few weather instruments exist. Recent tests have also demonstrated OTH radars ability to map ocean currents.

The US Air Force, Air Combat Command (ACC), is tasked to provide the services required to support the cold storage maintenance services for the Over-the Horizon Backscatter (OTH-B) Radar System sites. The contractor will be required to provide all labor, material, and supervision necessary to maintain the OTH-B Radar System in a caretaker status. Services primarily include maintaining equipment, facilities, and grounds at both the East Coast Radar System (ECRS) and the West Coast Radar System (WCRS). The projected period of performance is from 1 October 2002 through 30 September 2003, with 4 one-year option periods. Estimated contract value is $1 to $5 million.

This entry was posted on May 7, 2011, 12:01 am and is filed under Technology. You can follow any responses to this entry through RSS 2.0. You can leave a response, or trackback from your own site.